Mission. To empower local communities to design immediate and effective SAFE G solutions that implement optical fiber wired to the home and office. Local taxpayers and ratepayers are entitled to this alternative to wireless, because they have already paid for it. Please see: Irregulators v. FCC.

5G/AI/Internet of Things Juggernaut presents an imminent threat. The harms to our community’s physical and mental health, the local environment, violations of citizen’s rights to due process, property, and personal privacy are foreseeable and preventable. The threat is especially dangerous to our children, elderly people, those with special sensitivities, disabled persons with chronic illnesses, caregivers, and our economically disadvantaged and minority communities that have no escape in their homes or workplaces.

Remedy: Community Empowerment: An effective remedy begins with widespread education and training in a proven system of wise leadership, community organization, team building, and negotiation. With this purpose we have created a 5G Dojo to support local communities around the world that are facing similar challenges. The key is to share negotiation successes and practical experience, so these lessons can be immediately deployed within the network. Equally essential is to fortify community-wide resilience rapidly and effectively. (See: 5 Minutes toResilience)

Donations: Please make your check or money order payable to National Institute for Science, Law, and Public Policy, designated for "SAFE G/Community Empowerment Initiative". You can contribute in two ways.

Sponsors: Please contact us to discuss any questions or concerns and customized donation options.

Resilience and the Reflex Ball

Resilience and the Reflex Ball:

At Play in the Fields of the World

“But I was much older then, I’m younger than that now.” Bob Dylan, Back Pages.

I turned 75 in June and have arrived at a turning point on the road. I have found most magical things happen in life by chance. I was introduced to the Reflex Resilience Ball (RRB) one lovely May day when I saw my friend, Stefan, practicing in the gym in Santa Fe with a ball that seemed to float, untethered. Upon further inspection I saw in fact that it was attached to his head, and he was well grounded as his martial arts training enabled him to be. Fascinated, I resolved to see for myself. Thus, began my journey.

As the video suggests, the practice is simple, uncontrived, and almost childlike: we meet and engage (Stefan calls it “negotiating”) with the ball. We move, it bounces, we respond. That’s it: simple, playful, joyful (bouncing power), and fun. We are not trying to gain anything. Just playing in the Fields of the World.

After a few hours of practice, I began to discover, with Stefan’s help and guidance. The original meaning of discovery from the Latin (discoupire) is to “find” or “uncover”. The RRB decided to reveal itself.

And for me there is another familiar spirit on the journey, Pu’tai. He seems to have answer, pointing us to the moon. https://en.wikipedia.org/wiki/Budai 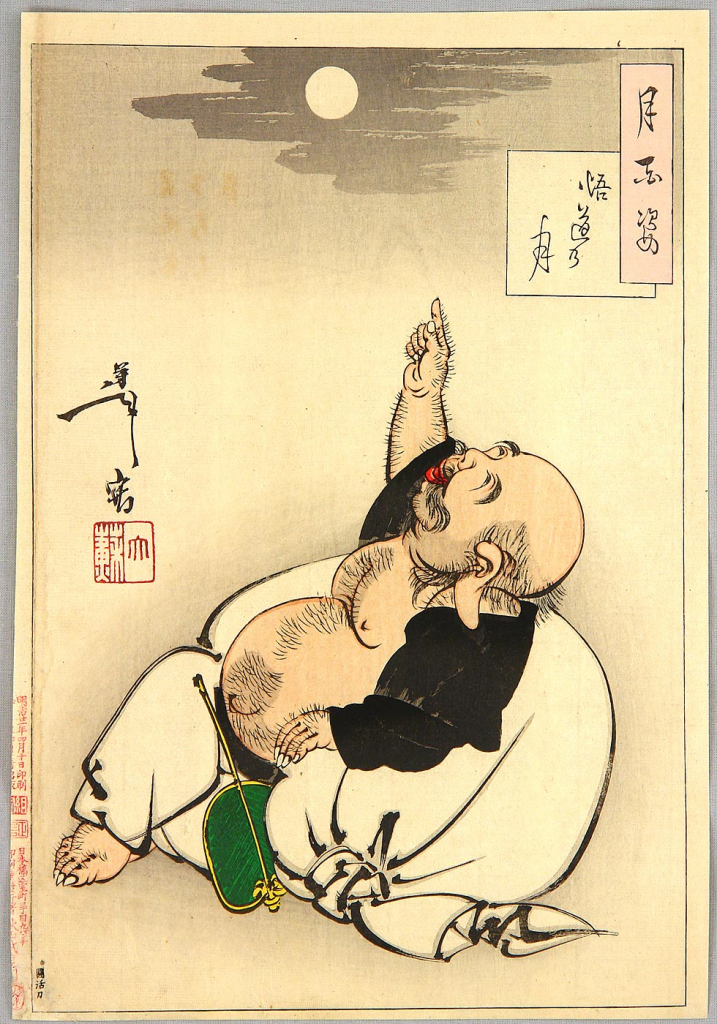 Moon of Enlightenment, A depiction of Hotei, the god of happiness and good fortune.

color woodcut, 1888. From the series One Hundred Aspects of the Moon.